I live in the desert southwest. There are many people who ask themselves when thinking about buying or ordering fish – am I on the coast? or near a large body of water? Alas, not the case here. Though there are wonderful trout to be had up north if you’re a good fisherman, and delightful shrimp somewhat far to the south – and of course the great Pacific Ocean a mere 5 hours away… here, no. Not so much.

That said, we live in a modern age where many things are possible. Flounder this week, however, was not one of them. I did find a nice Petrale Sole. Close enough for this desert dweller.

I have been out of the loop on my French Fridays for some time. By circumstance or other “stances”, I have missed my friends and the structure of my group. Hopefully this one will get me back on track.

So – on to the recipe. As you can see, my quest for flounder went unfulfilled. BUT, this was still a really great choice for once-again entering the ffwd fold. Very simple. On-hand ingredients  (with the exception of the fish!). And happily, something wonderfully good. So happy to be back.

The almond meal, flour lemon and seasonings are mixed together. Interestingly, the “skin side” of the fillet is brushed with the egg yolk, then pressed into the crumbs, creating a coating on one side.

I managed to get the sliced almonds toasted, but as you’ll see later… I forgot them! Oops! 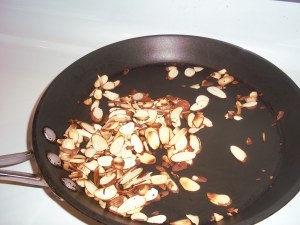 It’s a nice quick saute in butter (browned a bit first). The tablespoon or so of butter is heated until a toasty-brown, then the fillet is placed in the pan – crust-side down for a couple of minutes.

The fillets are then turned over. A little additional butter can be added, and then the browned butter spooned over the top. I’ll admit that I didn’t have a lot of butter for “spooning”, but it made me feel more virtuous! To make this more meuniere, it probably needed a bit more butter – but that was ok! It only takes a couple of minutes on the second side to complete the dish. 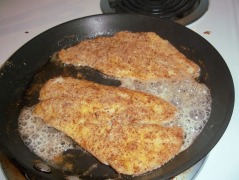 This was a very (very) tasty dish. The fish was perfectly cooked, and the nutty crust was nice on the one side. I could easily see making this for guests. The coating was not overpowering, allowing the flavor of a subtly-flavored fish to come through. I could see this preparation working with other types of fish as well, since the one-sided approach was so balanced. I’m looking forward to making this again.

(OK, to be honest, I’m not a “cooking fish indoors” fan – where I live tends to retain aromas. And I’m not a huge fin-fish (particularly the oh-so-popular salmon) fan in general. So this was a super-nice preparation. Very nice flavor and texture, without the down-side. I have to say, it was even nice the next day for lunch! So as a not-in-love-with-cooking-fish-at-home-indoors person – this was even more amazing!)