I’m willing to bet that a lot of the people who started cooking with French Fridays with Dorie were at least partially drawn to the project because of this recipe. This particular dish adorns the cover of Dorie Greenspan’s Around My French Table – the tome that we have been cooking through together for nearly 5 years. 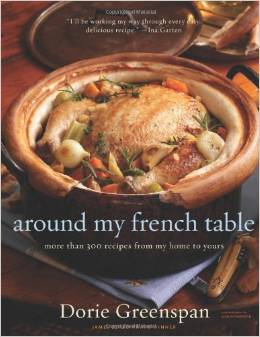 When we didn’t make this recipe early on, I assumed that eventually, if the group stayed together, we would make it our last. And in deference to the group – I have never made this particular recipe before.

This week, I have seen a lot of references to this particular recipe as those of us who have cooked together and shared our lives together, at least virtually (though for a lucky few – in person as well), have been making this recipe and talking about it.

I have to say that while I have been sidetracked lately – this time for a good reason (YAY!), I wanted to get to the finish line with all of my friends, even if I’d taken a few detours. Over the next several weeks, the caretakers of our group, the Amazing Mary of Lights on Bright, No Brakes, and the Wonderful Betsy of A Plate Full of Happiness, will challenge us to comment on our journey through both this wonderful book, and incomparable group. But this week is for our final recipe. chicken in the pot: the garlic and lemon version.

I just got back from a trip to Southern California this evening. I have a couple of new guys on my team, and recently (last week!) have several reporting directly to me – so I wanted them to get off on the right foot! And we are working on a very new initiative for my company – so it’s taken a bit of time away from some of my other pursuits. Fortunately, my friend Mary posted this recipe on line, so I could look at her post and see the ingredients. That way I could stop at the store to pick up a few ingredients on my way home from the airport. As I write at about 8pm Thursday evening, my chicken is cooking away in the oven. I don’t say this to make myself sound special or super-dedicated, but to let my fellow Doristas know that they are important to me, and I wanted to get to the finish line at least close as possible to when they did!

So! The chicken!! The big difference about this particular preparation is the sealing of the pot with dough! Dorie often speaks about ensuring that the pot of whatever you’re baking, braising, etc. … is properly sealed. This makes for a spectacular presentation (assuming it turns out like the photo). Otherwise, this is a nice chicken baked with a wonderful compliment of aromatics. 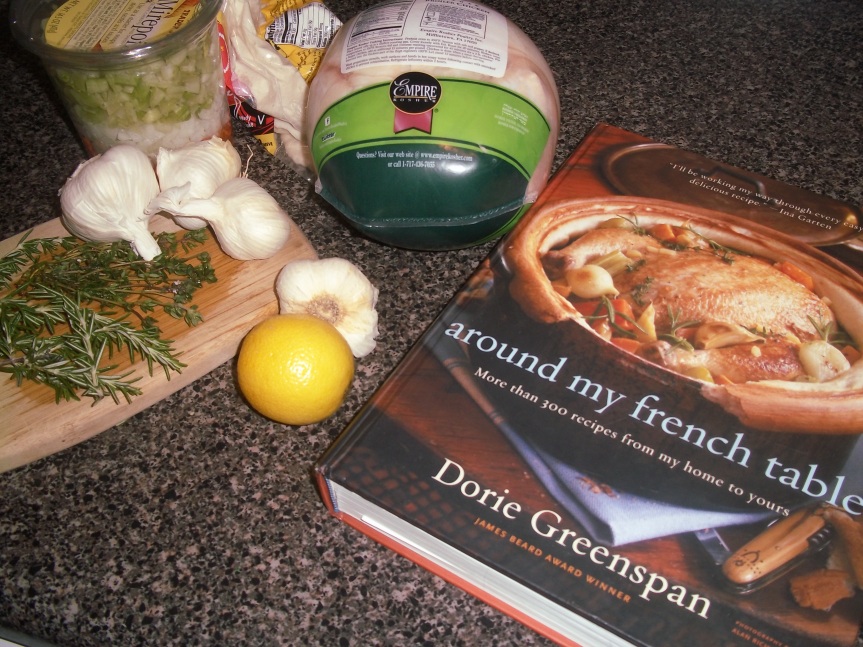 As you can imagine, I took a couple of shortcuts, but nothing too drastic, I hope! For the preserved lemon, I substituted fresh and skipped the simmer in the sweetened water. That is one of the few “new” things that I’ve been introduced to that I don’t just love – preserved lemons. Probably because I don’t make my own like so many others actually do.

I decided to make my life a little easier as well by making my dish in one pot. I had a bit smaller chicken anyway, and looked at the photo – and realized that the shape of the lid might be important. So I did what I would usually do – and chose my vessel for the end product, and then went out of order. I browned the chicken in some olive oil. Seasoning as I went along (my unfortunate bird spread her limbs a little inelegantly!) 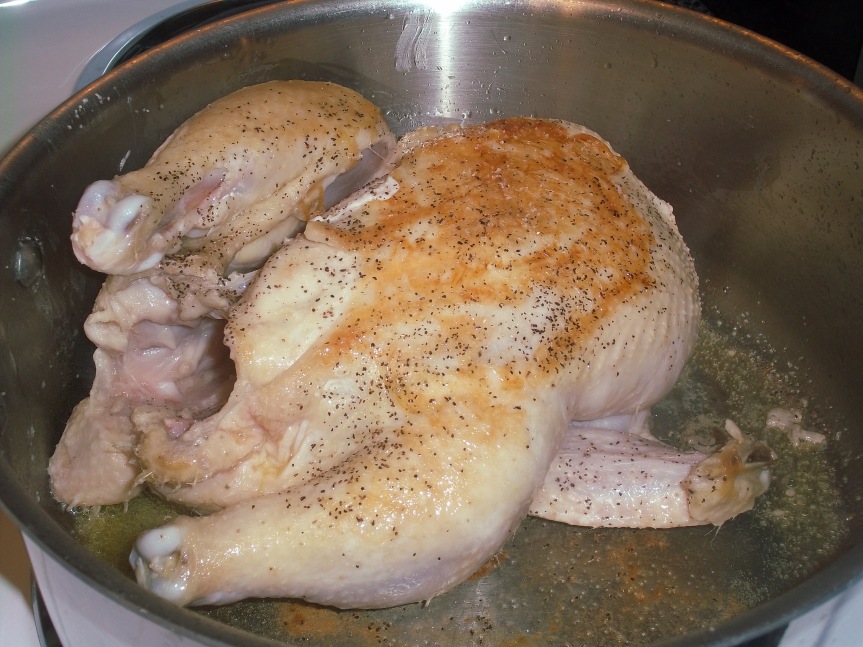 Once set aside, it was time to brown my vegetables – in the same pot of course. I used 3 heads of garlic (unpeeled, whole cloves), since my bird was smaller. But took advantage of some prepared veggies.

When browned, I added in the herbs and the peel of one lemon.

Once that was all together, I put the chicken in the pot, added the juice of the lemon and a good amount of wine. I skipped the broth altogether. And then the final “cheat” was added – store-bought pizza dough instead of the “paste” from the recipe. This was a “Dorie” idea, so I didn’t even feel bad!

My only real challenge with this in retrospect is that my pot was still warm – maybe that was why Dorie suggested using a frying pan to get everything ready, then put into a new pot! Oh well! Tricky to get the dough to stick on the rim, trickier to get a photo!!

At last however, it was together, popped into the oven and now, the waiting begins. It’s been fun making this recipe, anticipating everyone’s successes and, well, question marks about it. That is one of the most fun things about this group – as we make recipes, we often think of each other (will Cher “go rogue”?, will Liz add red?, the list goes on – I hate to leave someone out!!!), and then knowing that I will get to read my friends’ posts and find out what they loved, what they didn’t, and really, all about their experiences. What fun!!

Fast forward about an hour at 450 degrees – and here it is! Between the bit of oil on the rim, the pizza dough instead of paste – and maybe importantly the shape of the lid – mine popped off easily – no need for a screwdriver!!

As I sit here munching this quintessential  Dorie dish, sipping a glass of wine (what else to do with the rest of the bottle? ok, not all this evening!), I think that this dish does represent what I think she was trying to do with this book – make French cooking accessible to the home cook by presenting recipes that one might very well be served at a dinner party or home-cooked meal in France – and particularly one that if you were lucky enough to be invited, Dorie might serve at her very own French Table.

Best dish ever? Not really. I would not put this at the top of my list from the book. That said, comforting, lovingly presented, and delicious in its own right. I do think that it is the perfect last recipe to an extraordinary adventure.

I’m sure that there will be others posting about this recipe, and our wonderful group. You can see all of those links at our French Fridays with Dorie site.

34 thoughts on “ffwd – chicken in the pot: the garlic and lemon version”