Like several others of the CtBF tribe, I have fallen behind on my cooking from the book, and my posts. But here I am – on a Friday no less – the actual Friday that it was supposed to be posted – with my thoughts on the Caramel pork ribs.

Unfortunately, I didn’t take process pictures. Oh well. These are supposed to be a refined, French version of David’s memory of Texas ribs. They are actually quite popular around here, so I’ve kind of been perfecting my method, which is not much like these ones. But I felt the pressure to get these done – so here we go!

The basis of David’s sauce is caramel. With beer and bourbon, and a few of the typical suspects like mustard and ketchup and vinegar, plus some seasonings. I might have done my caramel just a bit too long, not sure – it’s usually designed to add just a little of that burned sugar note. I made mine in a separate pan, and then poured it over the ribs in a dutch oven. I made the full recipe, though had a bit fewer than half of the ribs.

I dutifully cooked the ribs, and uncovered them for the last. Somehow I think I got sidetracked, and let them cook just a bit long. They were not burned (though the picture looks suspiciously dark), but the sauce was more thick than saucy – not really right.

The caramel sauce did give them a good hue, but while fairly tender, not my favorites. The method, of just putting the rib sections in a covered pot, with sauce, and baking for a while worked fairly well. The ribs get turned a few times, then for the last 30 minutes, the cover is off. Still easier to do my method on the grill (getting a nice brown on them, then into a pan and direct heat for the remainder and sauce at the end). But fun to try something new. I was pretty happy that I made a smaller quantity as well, but ribs are generally pretty good. I threw the additional sauce over the leftovers which I think will make them a bit nicer.

The other dish today? Coq au vin – or chicken in wine sauce. I made this the weekend after it was scheduled, and of course, didn’t get it posted. Bad Candy!

For this one – I do have a lot of progress photos. Everything from the purple coloring of the marinating chicken to the end product. 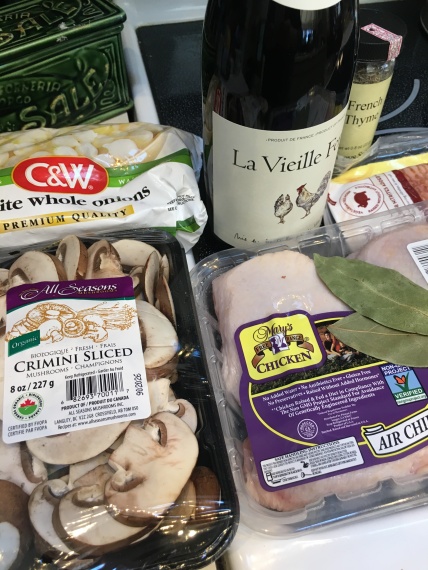 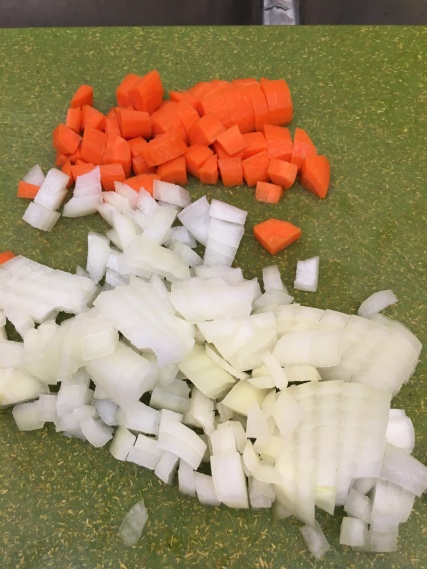 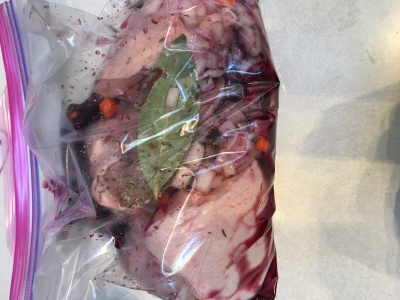 This was pretty good. I assume that this recipe was developed to use an older chicken and local wine to create something tasty. It was good. I also have made one using Riesling instead of the traditional burgundy.

I’ve been doing other cooking, and a bit of baking before it heats up too much. Lemon meringue pies, a lemon blueberry cake, cinnamon swirl bread… this list goes on a bit.

Happy to be back cooking with the crew! It will take me a bit of time to catch up on all of your posts, but I’ll get there! To find out what others thought of the caramel ribs, you can click here.