This was an unexpected surprise. Maybe it was the concept or the multiple “bonne idee”s that threw me. Once started, I had my reservations about the long cooking time. The two things that really stuck with me when I read the other ideas were: wine. and truffles. I thought that those items would definitely make this a bit more special, while not taking away from the simplicity of the dish. If you were to add spinach and mushrooms and bacon and leeks – well, you’d end up with a casserole (albeit, likely a good one). In any event, I decided to stick a little closer to the original concept. I’m oh so glad I did…

I originally planned on a smaller batch, since I didn’t really know what Dorie would call 4 starter servings. But as I got rolling, well, things happen. I melted about 2 T of butter in my pan, added the chopped small onion and let the onions soften. Then I added a few tablespoons of some prosecco I had on hand and let that simmer until it was about evaporated. I decided to add the pasta (about 1.5 cups) to coat with the buttery onions first – a little more like risotto. And then added my stock – really, my 3.5 cups of water and a corresponding amount of Penzey’s chicken stock base.

This all gets cooked down, uncovered, for what seemed like a long time. Dorie’s 20-25 minutes seemed long for pasta to begin with, and it took a bit more to reduce the stock. This had me a little concerned, since overcooked pasta isn’t my favorite. But. Sometimes it’s a good idea to stick with the experts. So, once that’s complete, I added close to a 1/4 c of cream (or what was left over from whatever else I’d made earlier in the week). That gets cooked to thicken a few more minutes, and then a good dollop of marscapone and a healthy dose of Parmesan get added here, along with some pepper.

And that’s it. Um, except for the truffle salt. I actually forgot that I was going to use some, so I did salt the dish a bit, then backed off. This really sends the dish to a different level, I think. I don’t have actual truffles around, but I think that this is a great way to get that fabulous flavor in a bang-for-the buck package. It lasts better than the oil (though that’s delicious too), and it’s just amazing on almost anything.

This was to be really a main dish with a little home made focaccia and a beautiful Sonoma Brut.

And this was truly delicious! Not risotto, but maybe better. I’m fortunate enough to go out to some fancy steakhouses from time to time, and have enjoyed some decadent “mac and cheese” – I’d take this over any of those lobster concoctions any day! This was delightful on it’s own. But this would make a spectacular (and very approachable) side for a great steak or other simple meaty dish. Of course, something green would have been smart – then I might not have had quite so much – but it was planned as a bit of decadence, so why not? I hope that others who tried this liked it as much as I did. You can find their results here. 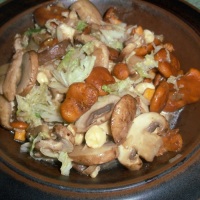