French Toast. Real French Toast. I suppose. This is definitely a different version than I would typically find here in the states. But, then again, this is also presented as dessert.

The real departure is the amount of sugar in the egg batter. Here we have eggs, an egg yolk (I only made 1/3 recipe), cream (I used half and half), sugar, a bit of salt and some vanilla. The bread is supposed to be brioche or challah.

Just like I typically would, this mixture gets all whisked together and the bread goes in for a good soak. The 1/3 recipe could have gone much farther than the recipe suggested – I could have made easily 4 pieces. But, I digress. 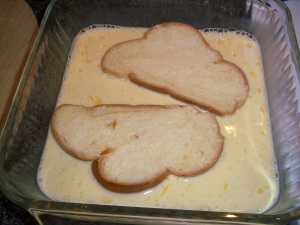 The next step is heating a fair amount of butter in a non-stick pan, and at Dorie’s suggestion, over medium-low heat. When ready to cook the toast, sugar is sprinkled over the butter – again, a fair amount. The toast is added, browned on one side. When you’re ready to turn the toast over, more sugar is added to the side that’s face up prior to turning. Then that side gets browned too. 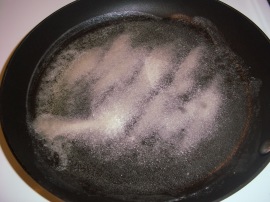 The toast is served immediately. It’s supposed to get a dusting of confectioner’s sugar. Dorie also suggests a fruit accompaniment

So, here are my thoughts. I ended up needing to raise the temperature in order to get the toast to, well, toast. Of course, that meant that I risked the sugar getting too caramelized, too quickly. If I were to make this again, instead of putting the sugar in the pan, I would have sprinkled it on the first side (and then placed it sugar-side down). I think it would reduce the likelihood of extra sugar getting away from me.

There was a lot of sugar. So I had to really think about this as a dessert (with Thanksgiving this week, this wasn’t going to get it’s appropriate venue – and yes, I had it for breakfast). It was kind of like an individual quick bread pudding, with a crunchy-sticky coating. And without my typical cinnamon and pecans and perhaps raisins. I really thought that the stick-to-your teeth caramel was a little off-putting, but then again… I definitely think this would be an interesting dessert with the suggested poached pears – or even fresh berries.

My first thought was, um no. But on second thought, well maybe. I think it would be a bit of a stretch for American palates for dessert, but again, I have really enjoyed some of the more typically French departures – a bit lighter, a bit less. With fruit, I could definitely see it.

It will be interesting to see what others came up with. You can find there results at the French Fridays with Dorie website. I suspect that there will be some really beautiful, and much more complicated results – embellishments and all!