This bread was surprisingly wonderful. I approached it with a little skepticism (for no good reason) and was a bit non-commital as I put the dough together. But when the first batch came out of the oven the next morning (to take it to work), it smelled heavenly! Then when we tore some off… wow! As a friend of mine noted – there’s a little burst of flavor in each bite. It didn’t need any dipping oil, and the combination of flavors was fabulous! The remaining half got baked after work for a bit more festivity – this time with some wine and nibbles to make for a nice, casual meal.

As I’ve been known to do, I actually got started on the recipe without thinking about photos… so the part you won’t see is me actually letting the yeast soften in the warm water, then adding the other ingredients. I’ll be honest, next time I will probably do what I normally would – put the dry ingredients together, and then add the warm water and oil. The yeast I buy today always works, so I don’t know that it needs to be proofed. Plus, it gets mixed/kneaded for a long time – I’m not worried about things not being incorporated. But it’s fun to follow the recipe at least once! Dorie tells us that this will be more a batter than a real dough, even after kneadinf 10 minutes. 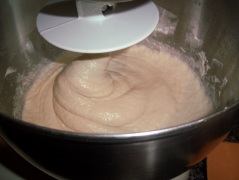 The flavorings for this are olives (I used Kalamata), fresh rosemary and orange (or lemon) zest. I love bringing rosemary home from up north where it really grows almost wild – lots of “volunteers” grow around the property. I decided to go with the orange flavor because I thought it would be new for me, though I know that olives and oranges are a classic combination. These ingredients are chopped and then mixed into the dough. 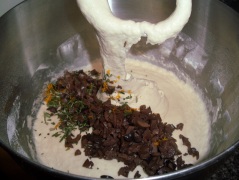 The whole mixture is then placed in an oiled bowl and allowed to rise for an hour or tow, then it’s mixed down and refrigerated 6 hours, and up to 3 days – though Dorie suggests overnight. 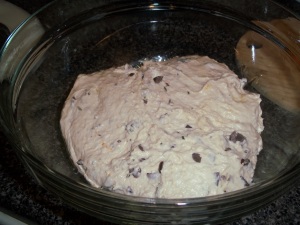 When you’re ready to bake (and this is one of the truly great parts – you need less than an hour until you have freshly baked bread!), you take half of the dough, and put it on a floured board. It gets patted out into a rectangle, then shifted over to a parchment-lined baking sheet. Once there, they get their iconic leaf-like slashes, a 15-minute rest, and then a nice brushing of olive oil (something flavorful is best here) and some coarse salt – I used gray salt with its lovely flavor. 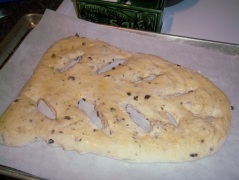 Finally, the bread is baked at 450 degrees for a total of 18 minutes. Dorie suggests re-arranging the baking sheets about halfway through the time. It is allowed to rest for a few minutes prior to serving. 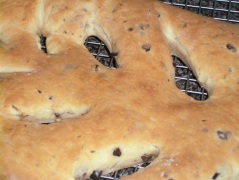 I have to say, this was great first thing with coffee. As a snack later in the day… but we did do as Dorie suggested and enjoyed a glass of wine and “savory nibbles” with it as well.

I would definitely make this again. It was so easy, and it offers such great flexibility in timing. It was a perfect recipe for when you’re having friends over after work – something that you can’t always say about other fresh breads. Loved it! 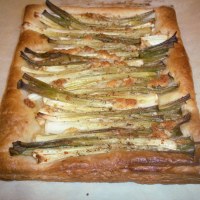