I think it was close to a decade ago, maybe more, that I first fell in love with the Tour de France. I was no particular fan of cycling, not even of the movie Breaking Away, but I found myself in a solitary hotel room in Toronto on a business trip, and was drawn into watching a bike race across the French countryside. The network at the time had the iconic maple leaf as its logo, and though the network and the race itself, have changed over the years, it’s been a driving force for the month of July. I’ve made decisions about various television providers, solely based on the inclusion of the current network carrying the TDF. I even bought an HD TV to watch the race, but also the wonderful pictures of France. I lived in Texas at the time (another “hot spot” in the summer) when I fell in love with the Tour, and I wanted an escape from the heat, I now live in Arizona. With due respect to the record temperatures in the rest of the country, we always have to find some alternative for the summer months, for our many hours within-doors, much like the rest of you in those cold, dark winter months. One of our escapes is the Tour.

I was charmed when I found that Dorie included this iconic dessert in her book – that celebrated a famed bike race – Paris-Brest. I am, unfortunately, a single-month-only fan, though I occasionally peek at other results. But, I thought, it would be fun to create some bicycle-themed desserts to enjoy while celebrating the ultimate test of cycling ability.

Dorie’s recipe (and the classic dessert, I’m sure), contemplates a large cream puff, resembling a bicycle wheel. I, on the other hand, thought that individual “wheels” would be fun – so I endevoured to create small circles, but still filling with the amazing-sounding filling.

I thought this was a lot of fun to make. If I were having a party, the large, single puff would be lovely with its toasted almonds on top. But this made for a nice little dessert, in honor of the boys of the peleton (who tonight will likely get to have some bubbly of their own. Though tomorrow they still have a ride, the Tour is mostly over – except for that last sprint along the Champs Elyses). Enjoy Paris! 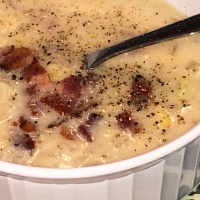