Fresh corn chowder. Most summers I spend a large percentage of my cooking on fresh corn, tomatoes and chiles, with some herbs thrown in. This year is different with many other commitments, and back to mostly cooking for one person with a busy schedule. We have local corn that is outstanding, though in the past couple of years, the farm swapped out corn fields for pecan trees (another terrific Arizona crop), and more alfalfa for hay. I went over yesterday, and oh my! It was closed for the day. Drat!! I didn’t even stop at my favorite farm stand as I’ll be out of town all next week, and already had more ingredients than I can probably use in the refrigerator. I love going as much for the experience and supporting local farmers as the produce itself. Alas… the grocery store got the nod.

The other thing about corn chowder is that I usually think of chowder as a cool-to-cold weather kind of dish, but here in the southwest, fresh sweet corn is a definite middle of the summer crop. But since I love corn in all forms, I was excited for this recipe to come up! 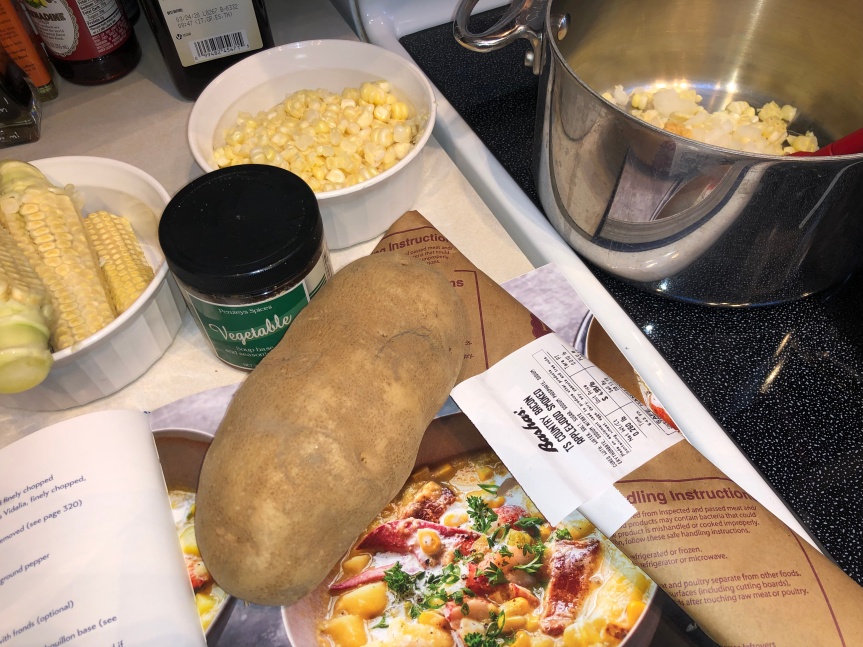 Even Dorie admits that there is some fussiness with this recipe, since she asks that the vegetables get divided and cooked separately in 2 different methods. I forgot to pick up celery, so luckily this vegetable stock is pretty celery-forward to make up the difference. So: corn off the cob, cobs themselves, sweet onion, and garlic to start off, and a portion of potato (not this much – maybe a third). The first half of the vegetables are sautéed in some oil, then the stock, cobs, potato and thyme, rosemary & bay leaf are added along with water and the soup base.

My initial thought when I first tasted the chowder is that I over-did it on the herbs. The recipe calls for (my half-portion) a sprig each of fresh rosemary and thyme. I thought I was being conservative on both based on what I “see” when I watch chefs, and I also used only 1/2 of a bay leaf. Um. I think I’ll cut back next time, and have some fresh chopped for serving. Surprisingly the herbs kind of overpowered the corn a bit.

Meanwhile, a couple of slices of bacon need to be crisped – I used Applewood smoked from the meat case, since it’s got great flavor. Once that’s taken out and drained, the other half of the vegetables are sautéed in the bacon fat that remains in the pan. Finally, that gets deglazed with a little white wine. 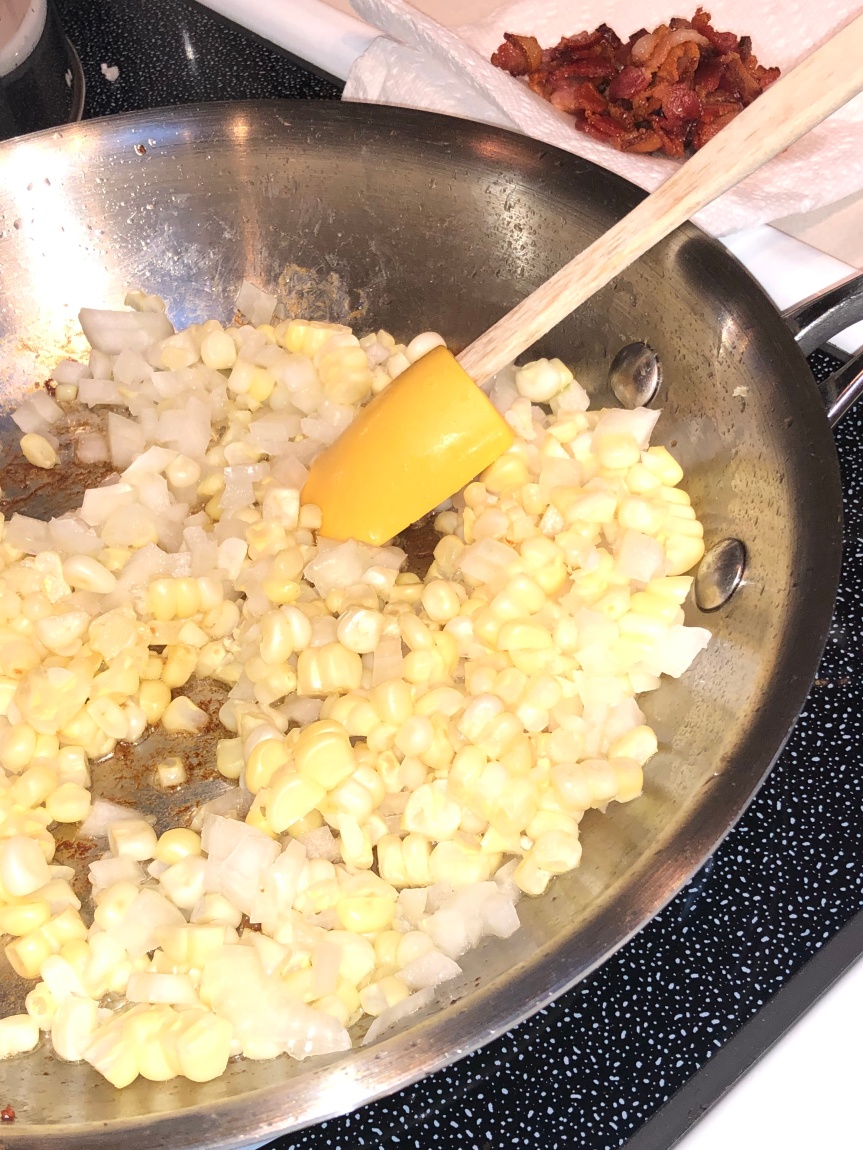 Now the bacon, diced potatoes and the sautéed vegetables are added back into the chowder and heated through, finishing with a bit of cream, and seasoning with plenty of salt and pepper. I kept a bit of the bacon on the side to top it off, for that extra hit of salt, smoke and crunch. 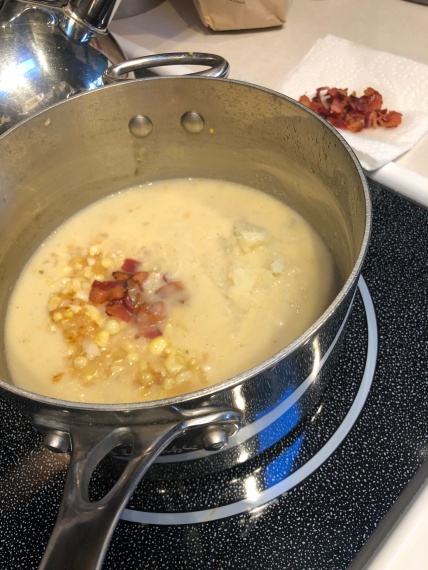 As I noted, my first impression was that the chowder was too herb-forward, but as I worked my way through the bowl, I started thinking that maybe I was wrong. It’s quite delicious. Though to be sure, several bowls and pans to make a couple of servings of soup does go against the grain. But I don’t know – maybe it makes all the difference in the world, though I’m also already thinking of ways to streamline it, without getting rid of the layering of flavors and textures. Next time!! 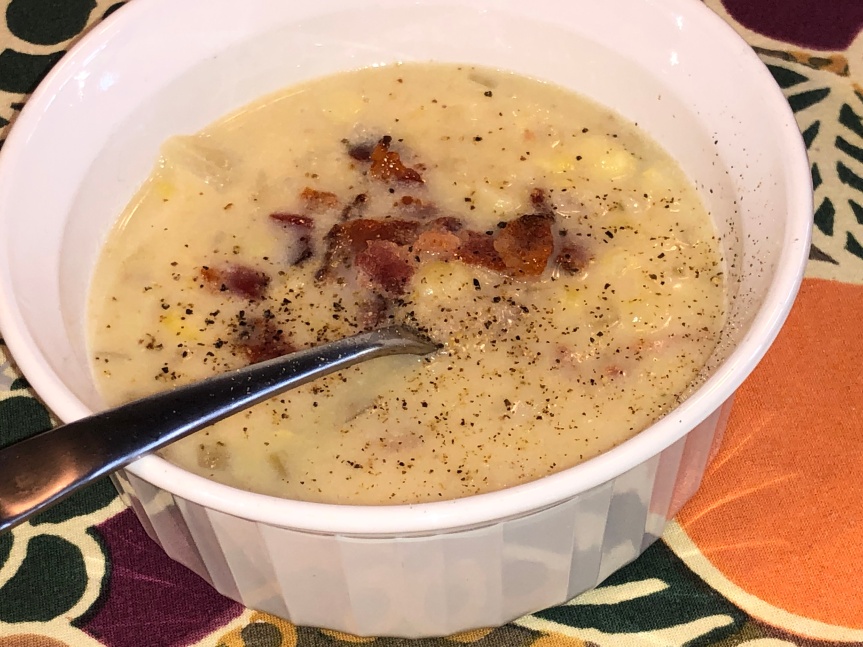 As always, this was a delicious recipe from Dorie Greenspan’s cookbook Everyday Dorie. This group will be now dedicated to cooking through the book with 2 recipes each month. You can see what all of these talented cooks/bloggers have to say by checking out this site.

Leave a Reply to Katie from ProfWhoCooks Cancel reply