This is one dish that I was happy to try. I actually like chicken livers – it was always a treat to have rumaki at a party or chicken liver pate (that I sometimes still make) that one of my folks’ friends would bring over when I was a kid. This is simple enough, if you can just get past the idea of the livers themselves. I’m sure some in our group have struggled, but I’ve learned over the years that sometimes you just have to get through a little to arrive at a great dish. There are few items in this dish, essentially onions, livers, perhaps some hard-boiled eggs, and some French Four Spice – that I was happy to see I had in my spice cabinet. 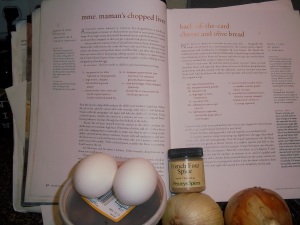 The onions get chopped and browned in a bunch of oil, then drained. The livers are cooked in the same pan until browned, but still barely pink on the inside so that they don’t get tough and chalky. They cool a bit, and then they are roughly chopped, then mixed along with the spices and eggs – all with a good dose of salt and pepper.

I served mine with just some simple crackers, though it would have been really good with some pumpernickel slices, or even French bread rounds.

I actually thought this was delicious, though it’s pretty rich for an average treat. I thought that the French spices were a really good addition. I am not as sure about the hard-boiled eggs, though I’m not sure why – maybe the way I cut them up? But this was a nice dish. I hope that the other Doristas survived the recipe. It will be fun to see how they fared – you can find the links to their posts here.