I’ve looked at this recipe several times in the past and always thought “really? you make French toast and then make that into bread pudding?”. I happen to love French toast (and have been making Smitten Kitchen’s Cinnamon Toast French Toast lately). I also really like bread pudding and often make Paul Prudhomme’s version out of his amazing cookbook Chef Paul Prudhomme’s Louisiana Kitchen. So I thought this would be interesting to try.

Again, we used challah for the base along with sugar, eggs, a little butter, milk, vanilla, and we were supposed to use dried fruit (as you can see, I was planning on using dried cherries – we’ll get to that). 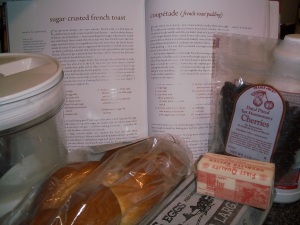 There is a first mixture made for the original French toast. This is really just eggs, sugar (kind of a lot) and a bit of milk. The bread is sliced, then soaked in the mixture. I added some cinnamon, because, well, I like cinnamon – a lot.

The slices get browned in butter, then placed into a prepared baking dish.

Another mixture of eggs, even more sugar, milk and vanilla is mixed together and poured over the top. It’s allowed to rest for about 10 minutes, then placed in a larger pan with a water bath, then baked for about 1-1/2 hours or so. As you can see, I managed to completely forget about my cherries, so this probably isn’t as traditional without the fruit.

What didn’t make sense to me was how bread, already soaked in eggs and milk would be able to soak up any more egg-and-milk mixture. Maybe it was my expectations that were wrong, but the result ended up about as anticipated – a (fairly large) layer of custard alone with the toast rising to the top.

What this meant was that there was weeping. Not mine, but the custard’s. That was ok, but just not as anticipated. I have to admit that I tried it when I first made it (warm) and was underwhelmed. Since I’m leaving town today for my niece/goddaughter’s university graduation, this was a time to share. I ended up taking this to work, and getting some testers. That also meant that I was “honor-bound” 🙂 to try it again cold.

I have to say, the reviews were pretty good. One friend, who is much more knowledgeable than I, actually knew that the dish was really supposed to turn out that way! (go figure, thank goodness for friends!) Another actually made the trek to my desk to thank me – and I’m not very easy to find these days.

I have to say, that when it was cold, I liked the contrast of the crispy edges of the toast and the creamy custard. But, that said, it was really too sweet for breakfast/brunch, and not really something I would choose for dessert. Maybe just too sweet in general. Perhaps some fresh berries would have lightened it up a little. I’m sure that the dried cherries that I’d planned would have been good and added a bit of tartness.

I’m not sure that I’m a convert, but this was fun to make. If you’d like to see how others fared with this recipe, stop by and check them out at French Fridays with Dorie. Happy weekend!

Baking fresh blueberry muffins! It must be Saturday!
Molly and Milo.
Saturday baking under way! This week it is @smittenkitchen the browniest cookies.
Rose Parade, good coffee and some home made cinnamon rolls! Great way to start 2020! Happy New Year!!
Nothing like some amazing tortilla soup on a cold winters night!!
A CtBF assist! Sweet and Smoky Roasted Carrots from @doriegreenspan ‘s Everyday Dorie. We also enjoyed the Brussels Sprouts with maple, mustard and bacon, and the Bourbon-Roasted Pork Loin. What a great Christmas dinner!!!
Baking fresh blueberry muffins! It must be Saturday!
%d bloggers like this: