I’ve been waiting to make this recipe since getting the book Around My French Table. I’ve even been a bit surprised that we haven’t tackled it before. But it was a good choice for a busy week, particularly when I was going to have people over for dinner.

I have to say, this wasn’t my very best effort. I expected the recipe to be an easy one, and it is – but not so sure about my results (not that it wasn’t delicious). I’ve made mousse before, so wasn’t too concerned. With only 4 ingredients, how hard can it be??

Since Dorie’s story goes that this recipe came from the back of a bar of chocolate, I can’t imagine that I’ll get in too much trouble by providing you the ingredients here: 3.5 oz of bittersweet chocolate, 3 eggs, pinch of salt and 1.5 t sugar. I thought – wow, so simple, and really not that bad for you (if you subscribe to the idea of dark chocolate being a super-food).

The first step is to melt the chocolate. I always just use the microwave.

Once the chocolate was melted, the eggs get divided, and then it’s only a few minutes to having the completed mousse. I was quite proud of my melted chocolate – not too hot. but don’t know if that’s where I went wrong. Also, the room-temperature eggs were significantly more difficult to separate – good thing I had some extras!

The yolks get mixed into the chocolate. Then that mixture is lightened by the whipped egg whites (to which the salt and sugar have been added). My chocolate really seized up when I added the egg yolks, that made it difficult to fold in the whites.

It seemed that the mixture really reduced when I folded the whites in. It wasn’t as fluffy as I’d hoped. I may have over-whipped the egg whites, but I think it was really the thickness of the chocolate mixture. Once this was complete, the mixture was spooned into individual serving dishes.

I made mine a bit ahead, so put the dishes in the refrigerator. I was worried that there wasn’t much mousse for each person. 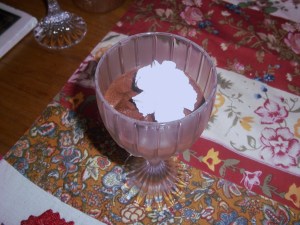 Not the best photo, but you can see – presented with just a bit of whipped cream on top. The consensus was that it was delicious. A very decadent shot of chocolate. I still think it could have been a bit lighter, but it was a great ending to a simple meal.