This chicken basquaise is really a piperade to which chicken is added. When I did a little added research, I found that this recipe is really quite traditional.

“A basquaise is a type of dish prepared in the style of Basque cuisine that often includes tomatoes and sweet or hot red peppers.”

“Piperade (Gascon) or Piperrada (Basque), from piper (pepper in Gascon and Basque) is a typical Basque dish prepared with onion, green peppers, and tomatoes sautéd and flavoured with red Espelette pepper. The colours coincidentally reflect the colours of the Basque flag (red, green and white). It may be served as a main course or as a side dish. Typical additions include egg, garlic or meats such as ham. This is a traditional French dish and is served in restaurants and cafés throughout France”

So Dorie’s dish fits this definition perfectly – she adds chicken rather than ham to her dish.

First, the onions are prepared. Dorie had some specific directions about cutting up the onion. I thought I would go ahead and try it. Essentially making quarter-slices, but using the root-end of the onion to hold things together while you’re slicing. Then they are given the first of many sessions of a slow saute until they were softened.

While the onions simmered away, the peppers needed to be prepared. OK, so this time I just did my normal “cut sections off of the pepper around the core, then slice” method for the bell peppers, and then cut half-rings from the Anaheim chiles, since it seemed that it would give me more uniform slices.

The other ingredients of the dish are then prepped so that once the long, slow simmer of the peppers, they can be added, and those flavors can layer into the mix. Tomatoes, garlic, bay leaf and some seasonings. I haven’t yet found Esplette pepper, so I chose some ground Ancho chile, since it’s flavorful, yet not very hot. 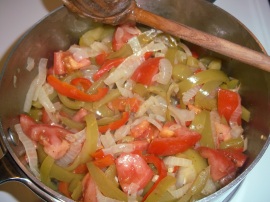 While that finishes cooking, the chicken is browned, then the pan is deglazed with some white wine, then it’s added to the simmering piperade, covered and allowed to cook until the chicken is tender.

Finally, the dish is served with white rice, and garnished with some fresh basil (or cilantro). I was glad that I didn’t skip that, because it did add some brightness to the dish.

This was good, though definitely not a great choice for a week-night. Even though it doesn’t take a lot of “active” time, it still takes a while to get everything to the right consistency. I’ll be interested to hear what others from our French Fridays with Dorie group have to say about this one.