I’ve had this book for years (!), and have never made a single recipe until now. The book was originally published in 1996. It seems an unlikely time for me to have purchased it, since I’d just returned from 2 years in Australia – I don’t really remember it as a time for baking – but maybe that’s why it didn’t get used.

It’s interesting to see how cookbook publishing has changed. From all text in early books, to the wonderful drawn sketches in Mastering the Art of French Cooking to the black and white photos (with the sections of beautiful color photos) of this book, until now we have books with both full color photos, and apps with online recipes and demonstrations!

But, it’s time to get started. If you’ve followed my blog, you’ll know that I have been baking for quite a while and my grandmother taught me how to bake bread at a pretty young age. So it was fun for me to try something different (and also to re-visit my grandmother’s recipe).

Lately, I’ve gotten into the current “dump everything into the mixer, and let ‘er rip” kind of procedure with breads, but in this instance, I thought it would be fun to follow the process as written. Initially, it’s just the yeast, water, a bit of the sugar and salt into the bowl to let it all soften.

After just a couple of minutes, the whole thing ends up a bit of a lumpy mess, but it’s ok!

Now, the magic of modern appliances comes into play (OK, so, my Kitchenaid is over 30 years old – older than this cookbook, but still…). The dough gets kneaded for about 8-10 minutes more. It ends up looking like this. 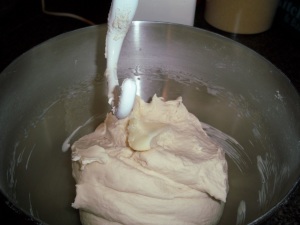 But we’re not done yet. Unlike my grandmother’s recipe, the butter is added later, and a tablespoon or so at a time. Luckily, Baking with Julia warns us that our beautiful dough is likely to separate! I’m not sure why it’s done this way – I’d love to know what the reason is.

Eventually, it becomes a beautiful bread dough again, and all is saved! Back in the day, I used to get all worried about not kneading bread dough by hand, as if something elemental would be missing. Those days are gone, though I admit I will still spin it a turn or two if the mood strikes. Once it’s in a nice ball, it’s placed in a greased bowl – I put it “pretty side down” to take care of the top, then turn it over to rest.

After the dough has risen appropriately (OK, so about double), 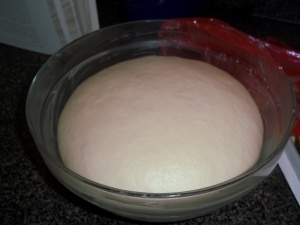 this is where it gets more interesting. I’m more of a “wrap the dough under and turn it into a nice oblong shape for the pan” kind of person when it comes to shaping loaves. Not here though. There’s a specific pattern to follow. I suspect it would make terrific-looking cinnamon swirls, or some such thing. But in the interest of learning, here’s what I did.

Then, it all gets plopped into a prepared loaf pan. As you can probably guess, maybe a bit unevenly, but oh well. The loaf got covered to allow a nice rise. The other half got placed into a bag in the freezer… you’ll find out more about that later!

The dough is allowed to rise until nearly double (the rest will happen in the oven). It’s baked for about 35 minutes (for my oven), importantly, until it reaches 200 degrees.

This was really great white bread. Over the last couple of weeks, I’ve made both this and my grandmother’s recipes (the main differences: 5.5 c vs. 7 c flour, and the butter added at the end in this recipe). They are both good. My pans are a little smaller, so the lower amount of flour makes sense – plus there’s the nostalgia of the recipe my grandmother gave me. Absent that, this is perfect! And who doesn’t love, love, love fresh, homemade bread? Just today we had a “toast” break – homemade bread, butter and jam for a nice little pause in a busy day.

So, what did I do with that other half of the recipe? Well, the other thing my grandmother taught me to make was cinnamon rolls. I was going to Tucson to visit two of my nieces who go to UofA on Saturday, and thought it would be nice to make a treat. And what is the only thing better than a loaf of homemade bread? You guessed it – homemade cinnamon rolls!

I’ll blog about them at another time. But this was a fun, delicious (and even nostalgic) recipe. What a great start of a new adventure! Can’t wait to see what all of the other Tuesday with Dorie bloggers write about. If you’d like to try the recipe, you can find it here.