What a deceptive little name for a recipe. Truthfully, this is quite simple, but it’s definitely different – a little more than just corn soup.

I am late in both getting to the recipe as well as the blog post about it. I simply ran out of time. But I love everything corn, particularly late in the summer when it’s at its best. So I happily planned on “catching up” with my French Friday with Dorie compadres.

Very simple – even more simple than my favorite corn chowder (no potatoes for me, thank you very much).

This year I learned a new way to cut corn off of the cob. Previously, I had always used a cutting board, layed the cob down on its side, and sliced off the kernals. But I read something about using a bundt pan… and the rest is history!
The de-kernaled cobs are simmered in milk, while the onions, then celery, carrots and corn are sauteed in butter.
Once all of this is done, everything is combined for a nice slow simmer.
Finally, the cobs are removed, the mixture is pureed (with my immersion blender), and it’s ready for serving!! I served mine with some freshly-baked whole wheat walnut soda bread. Nice weeknight meal! 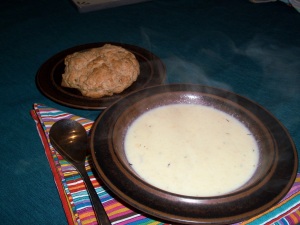 This was a really nice soup, though I don’t know that it will replace my favorite corn chowder. While it was simmering, I wasn’t bonding with the combination of the aromas from the rosemary and corn. But once it was finished, I realized it was delicious! Different, and more of a fall-ish dish in my mind. But good, and one that would marry with other fall flavors to make a nice addition to upcoming menus.

One thought on “ffwd – corn soup” 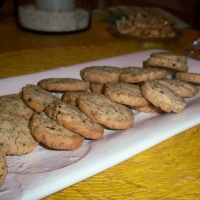