One of the things I’ve been trying to get back into this year is bread-baking. It’s something I enjoy a lot, but don’t do enough (and of course, don’t really need!). My grandmother Johnson taught me to bake bread when I was pretty little – still living in Michigan. She wasn’t one to be very “grandmotherly” like so many of the farm-women who comprised our neighbors in our small town. Clara was more of a “city” person by then, though as I’ve learned over the ages, she really was at heart, a small-town farm girl.

Clara grew up on a farm in New Mexico, where she met my grandfather Arvid. Fast-forward half a century or more, and there she was in our “modern” kitchen in rural Michigan teaching me how to bake loaves of bread and cinnamon rolls! Those were some of my fondest memories of her, since, as the only girl in a family of lots (!) of older boys, it was a nice time to have together. By that time, my grandparents had lived in Southern California for a long time, which is how all of that “city” stuff got in the mix.

Fast-forward less time, and I have been baking quite a bit over the past year. I find it’s relaxing, and connects me to things that are simple and important. To paraphrase – loving people and cooking them tasty food. Plus, it’s a handy skill to have…

My friend Teri got me started with the French Fridays with Dorie cooking group (and this blog) because she was baking with another group – working their way through The Bread Baker’s Apprentice. While I loved the concept, I knew that I wouldn’t have the …. to take on something so ambitious. BUT, then I ran into some blogs about No-Knead Artisan Bread. I thought – well, I can do that! All of the recipes are basically the same. KAF has the same general formula as the one in Artisan Bread in 5 Minutes a Day. The concept is great, and it is plenty forgiving. Here’s the recipe. 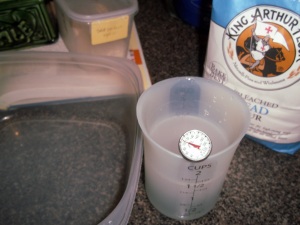 As with all yeast breads, the biggest trick is not killing the yeast. So the water should be at about 100 degrees. Modern yeast is a bit more forgiving.

The warm water is mixed with the yeast and salt first. I’ve found that it’s somewhat important that this is incorporated thoroughly, though I have to admit it will still work if not! 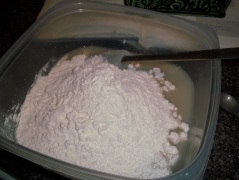 The dough at this point is a bit “rough”, but really, all you’re trying to do is get the flour moistened. 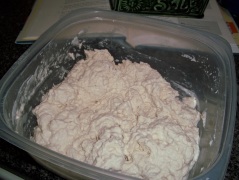 After a couple of hours of resting on the counter, it looks a little better. Though not exactly like what you’d expect! Essentially, the dough rises, and then kind of flattens out on top. That’s when you know it’s the perfect time to put the dough in the refrigerator (though you can go on either side of this successfully). 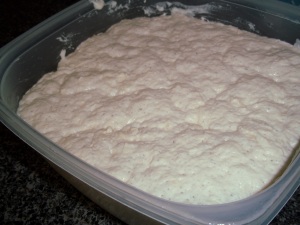 Whenever you’re ready to bake, out comes the dough from the refigerator. For this recipe, it’s easy, simply cut the dough in half to get the right size. You coat your piece of dough with flour to make it possible to handle, turning it to form a ball, while folding the edges under to make a nicely shaped loaf. 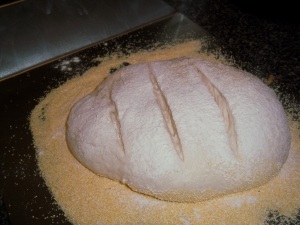 This is placed on a peel covered with cornmeal, and allowed to rest for 20 minutes. Then, pre-heat the oven (with a bread or pizza stone, and a metal pan for water) to 450 degrees for another 20 minutes. Have ready a cup or so of hot water. Dust the top of the bread with some flour, slash the top of it, and then slide the bread from the peel to the stone, put the water in the metal pan, quickly close the oven door – and then wait… for about 30-35 minutes.

The bread is baking with the steam, which creates the classic artisan crust. The stone also helps draw moisture away, and keeps the heat even. The internal temperature of the bread should reach 200 degrees. That happens at about the same time that the crust has reached a deep golden brown. 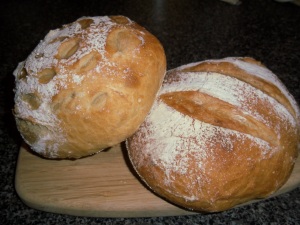 When the bread comes out of the oven, place it on a wire rack to cool. Ideally, you can hear the bread “sing” as it cools. Of course, if there’s a lot going on, kind of hard to do that. BUT, it happens! Wait until the bread cools to slice (though it’s difficult, I know). The leftovers are great too – I made a little tartine saint-germain with my bread and a bit of rare prime rib (what a great use for leftovers). Perfectly rounded out by “cheating on winter” pea soup. 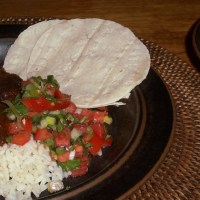